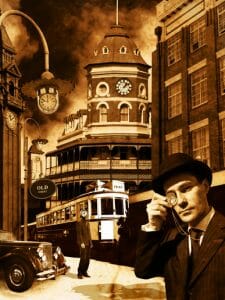 Inspired By A Streetâs Past:

âBold Street: The Monocle Of Timeâ was inspired by the time anomalies that have occurred on this busy Liverpool Street. In recent years, Bold Street has gained an eerie reputation as the location of many alleged time-slip occurrences where people have claimed to travel briefly back in time to Bold Street as it was in the 1950s and 1960s.

One of the most graphic of paranormal Bold Street happenings was witnessed during day-time by a dozen people in the former Cornet store, now Edwardâs wine bar. On this occasion a noisy vintage cab was heard rattling over cobbles, the horse snorting as it pulled up outside the shop. Surprised onlookers saw two well-dressed Victorian gentlemen alight from the cab, heard the door slam shut and then walk through the store, deep in conversation, only to disappear at the back. The witnesses assumed this to be a period film shoot, but on looking out of the window the cab had silently vanished just as the two Victorian gents.

This report is far from unusual, Steve Parsons, of Para.Science, a Wirral-based ground said âWe are inundated with accounts, about 100 in two years, The universal constant is that itâs a time-related event, Itâs always back in time, either minutes or decadesâ. Ann Winsper, Para.Scienceâs psychology expert, says âPsychologists might say this is a form of mass hysteria, but a lot of people are separately reporting the phenomena and describing interaction with figures from the past who are surprised to see people in modern dressâ. Steve Parsons added: âWeâve been able to check accounts such as researching which businesses were here. There are bizarre accounts such as people who see themselves, or brothers and mothers walking past while these people are definitely elsewhere. By using old street directories we can pin-point the period in question to a couple of months. There is nothing to be gained by these people except losing their credibility in describing these mattersâ. The sheer number of cases make Bold Street one of the most important centres of paranormal activity in Britain.